← The Interconnections of Media: From Frank O’Hara to Hop Along
Silence = Death: Interpreting the Shadows and Words of Antonius-Tín Bui’s Not Sorry for the Trouble →

Iconography in Rougeux, Bui, and Paradiso’s Works in “Still Here: Art on HIV/AIDS”

“Still Here: Art on HIV/AIDS” is not only eye-catching but also moving. Through various iconography, the works featured in this exhibition explore deeper the experiences that the artists bring with them. From the icons of the Red Cross to the pansy, Lucas Rougeux, Antonius-Tín Bui, and John Paradiso challenge viewers on their perceptions on commonplace objects in the LGBTQ+ community.

The Red Cross has been around for decades, and the image of the red cross is a symbol of aid. In “Clean Blood Only,” Rougeux highlights this symbol by painting it in the center of the canvas. However, although it has connotations of help and in a sense, safety, its surroundings say the 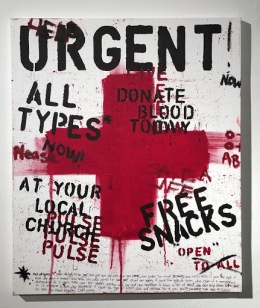 contrary. In the wake of the Pulse shooting, many blood donation centers put out a call for blood claiming that anyone was welcome to donate. Rougeux scatters text, such as “All Types” and “Free Snacks” to portray an amicable, non-discriminatory environment. Unfortunately, these blood donation centers restrict gay men, especially those with HIV/AIDS from donating their blood. Obviously, with such a limitation, the centers are not as welcoming as they claim to be. Rougeux calls upon this hypocrisy, which is only further heightened by the stark red of the red cross that was – is – supposed to be a symbol of inclusivity.

Rougeux is not the only one who utilizes iconography in the artwork. Bui draws upon their experiences as a non-binary Asian-American to create vivid and intricate paper-cut designs that make up their “Not Sorry for the Trouble” series. Coming from a Vietnamese background, Bui is concerned with bridging the gap between their experiences as an Asian-American and their experiences as non-binary, part of the LGBTQ+ community. First, through their work, they remind us that AAPI do exist in this community, and second, the perceptions towards them need to be addressed, particularly in the HIV/AIDS crisis. Such perceptions include sexual stereotypes that do nothing but hurt AAPI. Bui cuts out East Asian icons, which act as the base of their messages. In “Not Your Submissive Bottom,” an ancient warrior is surrounded by 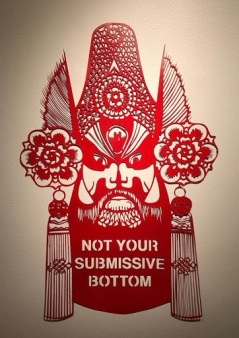 flowers from which tassels hang. The text in all-capitals, the delicate paper cutting, as well as the vibrant red against the white, create a sense of urgency to Bui’s message: that AAPI in the LGBTQ+ community are not your stereotypes.

In “Pansies and Tulips,” Paradiso creates an evocative quilted piece that display of gay men, especially during the HIV/AIDS epidemic. In the center of the piece is a snapshot of two men kissing and surrounding them are colorful pansies. The pansy may be just a flower, but in the LGBTQ+ community, it’s also a derogatory word used to describe gay or feminine men. With such negative history, Paradiso reclaims both the word as well as the icon to evoke a beautiful and haunting sentiment. However, while he reclaims “pansy,” he reminds us that the stigma around gay men still exists as exemplified by the “CAUTION” tape that runs throughout the piece. The “CAUTION” warns the viewer that what they’re about to see is still taboo even in modern day and that the LGBTQ+ community is very much still marginalized within society.

Every single piece in “Still Here: Art on HIV/AIDS” is colorful and evocative. The HIV/AIDS 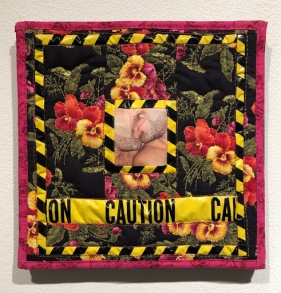 crisis happened largely in the ‘80s, and that was only a few decades ago. While it has died down, there is still very much stigma towards the disease and those with it. Rougeux, Bui, and Paradiso not only remind us of the crisis and the community involved, but they also use stark but beautiful iconography to transform their experiences into those that others can gain knowledge from.

Antonius-Tín Bui, Lucas Rougeux, and John Paradiso’s works are included in Still Here: Art on HIV/AIDS at The Stamp Gallery of the University of Maryland, College Park, from October 29th to December 7th, 2019.

Save the date for our next exhibition- Neuro Blooms: Mixed Media Art by Leslie Holt. Opening reception Wednesday February 12, 5-7 with a talk from the artist at 6p.m.
“Still Beginning” will be closing tomorrow along with “Still Here: Art on HIV/AIDS”! Be sure to come by the Stamp Gallery to look at amazing intersectional art as well as witness first-hand accounts of the HIV/AIDS crisis among the LGBT+ community. #StillHere