Brea Soul | Multimedia artist, photographer, and designer in the Maryland DC area | Exhibiting in capital lives from May 30 to July 4, 2018 at The Stamp Gallery | University of Maryland, College Park | Interview by Grace DeWitt

Can you tell me a little about yourself? Where did you grow up, and where are you based now?

I am a multimedia artist and photographer who is dedicated to highlighting new, blossoming and vibrant artists, and the cultures of minorities in Maryland and D.C. I am originally from Trappe, Maryland, a small town located on the Eastern Shore. Since moving away to attend University of Maryland, College Park, I am now based out of College Park, MD.

You graduated from UMCP with your Bachelors this past December. What did you study, and what are you up to now?

I studied Studio Art with a minor in Art History. I currently work as the in-house graphic designer for Brentwood Arts Exchange, a contemporary art gallery in Maryland, and as a photo contributor for Capitol Standard Magazine, a magazine for young professionals in the Washington, D.C. area. I hope to move in the direction of multimedia production and directing.

Could you briefly describe your artistic practice?

I always felt like I didn’t belong, but in reality, relatable representation just lacked around me. So, in my photography and webseries, Soul Series, I choose to capture the essence of a person’s true identity and natural lifestyle. I seek modern representation of African Americans and other minority groups because I want to highlight the identities and stories of those that are still often overlook or ignored. My goal is to encourage the world to observe these races and cultures closely and then to connect in a way they have not before. I love working with color, natural lighting, composition/framing and movement. My influences include Gordon Parks and Roy Decarava, music, and cultural relativism.

What is your personal experience with D.C. at this moment? To what extent do you have ties to this city?

My personal experience with D.C. comes from my relations to its people and its culture. There is a renaissance happening in D.C and around connecting parts of Maryland that most are not ignoring, but rather, overlooking. Knowing this and a lot of the young upcoming talent that is based out of DC or close to it, I believe it’s a job of mine to constantly capture the culture: whether it’s related to art, music, fashion, or simply the lifestyles that DC produces.

How would you describe D.C., or the D.C. vibe, to people who have never been to the city?

D.C is a traditional place with a lot of history. When you visit D.C. and learn more than what is shown on TV and through articles, you learn about all of the rich culture D.C. produces. D.C. consists of a lot of creative activity, networking, and opportunity. D.C. is not as big as NY but D.C. consists of endless industries and because it’s smaller, you have plenty of room to connect, learn and grow here.

Let’s talk about your photographs in capital lives. Do you know any of the subjects personally? Were they all taken in the district?

Installation shot of Brea Soul’s All Things Go (Kweku Collins) 2 and Liberation featured in capital lives at The Stamp Gallery through July 3, 2018.

I only know two of the subjects personally and the others I connected to through networking. This may come to you as a surprise, but only one photo was taken actually in the district. Can you guess which one? The other three were taken relatively close to Washington, D.C., in places such as Hyattsville and College Park.

Do you consider these images to be portraits of individuals, or a more collective observation of a regional city culture?

It’s hard to answer that question because it’s technically both. Although these images are simply portraits of residents/performers of the area, the people involved are important to the creative history of D.C. at this specific time. One is an upcoming wordsmith and poet who is known for his skill all over the city. The model in Liberation represents the Latino community that is being directly affected from the current state of the United States and its presidency. Kweku Collins, is a rapper/singer performed at an annual D.C. festival called, All Things Go.

I understand that the prints exhibited in capital lives are part of a larger series. What is your intent for that series?

My intent is to constantly portray the lives existing in Washington D.C. and the surrounding area, and create a series that shows who is living in D.C. and what they are doing. Basically, I want to document the current times and culture.

What was the reasoning behind the titles for Dazed 1 and Overtime 2? Were these planned images, or candid? 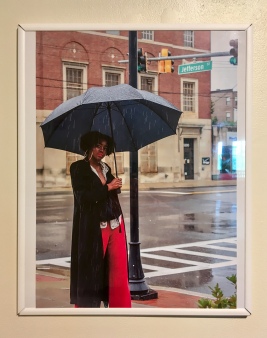 Dazed 1’s title stems from the expression presented by the subject throughout the entire photoshoot. A woman is shown wandering aimlessly and although she is giving direct eye contact, one can assume that there is something on her mind. Something has her distracted or stuck.

Overtime 2’s title comes from personal background of the subject and plays off of that narrative. The subject was a UMD dropout and then after a year, decided to return back to UMD. Throughout the photos from this photoshoot, he can be found in a classroom, outside on campus and walking through hallways. Wherever he travels, he is focused on the task at hand. In Overtime 2, he is seen with a black notebook and pen on campus with an alarming look. I like to believe this photograph embodies when a lightbulb goes off for a person and that usually happens after a while of focusing on a certain subject.

Can you explain what’s going on in All Things Go (Kweku Collins) 2 and Liberation 1?

In All Things Go (Kweku Collins) 2, Kweku Collins had just finished performing and starting a meet and greet. I wanted to capture his presence while meeting his fans. He is normally shown on a stage and singing so I thought it would be cool to get another perspective of him and his style. Even while not on stage, he kept the same aura and presence of light and joy with him.

In Liberation 1, I was on a mission to portray a new-found sense of freedom. I selected an aspiring model and did a photoshoot at an isolated hotel. The location was chosen for the narrative of one running away or being forced to be on the move. During the subject’s time alone, she reflects. So Liberation 1 portrays the outcome of her journey when she has finally come to a point where she is prepared and ready to take on whatever is next.

I find myself in rap and R&B spaces within Washington, D.C. because that genre of music is a heavy part of my own personal culture and I know more people within that space than other genres. However, I hope to break into other music scenes because although Rap and R&B is special to me, my goal is to capture creatives and artists of all sorts of backgrounds. There are a lot of talents out there and I want to capture as many as I can. I guess I just started off in a familiar space. My photography, in those scenes, serves as a way to capture timeless moments that the people never get back; but through my photography, they will never forget it.

What do you hope viewers take away from your photographs, perhaps in conversation with the other works in capital lives as a whole?

When people visit capital lives, I simply hope to introduce them to people and/or cultures that are blooming here in the area and start a conversation there. Media coverage and photo documentation about Washington, D.C., is usually centered on politics, protests, sports and or fancy landmarks. I want to introduce people to people. Simple. Real people that you can learn from, bond with and or help in some type of way. I hope that in combination with the other photographs from the other artists, visitors will get a complete 360 realistic perspective of DC. For example, Bo Chen successfully and effectively captured people protesting on the streets of D.C. while my photos show the residents of D.C. Having this imagery together shows a complete image of the time right now in D.C.

Which of your photographs in capital lives do you connect with the most?

I connect with them all but if I had to choose one, I would pick All Things Go (Kweku Collins) 2 because the imagery involved is someone of color and a flower. In my opinion, a sunflower embodies a source of light. Within my photography, but more importantly within my life, I try to radiate positive energy and show others love.

What camera did you use to shoot the images in capital lives, and what are you shooting with now?

Since gifted, I have been shooting my photography through a Nikon D3400 and it’s been amazing to learn and practice on. I have plans to upgrade in the near future, either to another Nikon or Sony.

You’re also working on a webshow called Soul Series. Can you talk about the project and goals for the show moving forward?

Soul Series is an original web show that follows me, a 22-year-old spirited artist from Maryland, as I navigate throughout the DMV/DC area interviewing other artists and creatives. In season one, Brea comes across an illustrator, a fashion brand and one painter. Season two involves more musicians: ranging from a music group, a disc jockey and percussionist. The goal for the show is to constantly discover and highlight talents, in this area, who are steadfast in their skill whether its related to visual arts, music and or fashion. The biggest goal for this project is to get the show picked up by a local production company or studio, in hopes to reach a bigger audience, which could result in income, connections, and exposure for the artists and creatives interviewed.

Any future shows or projects that you would like to promote here?

Through my photography and webshow, I meet a lot of artists who are so fresh in my mind. I thought about a show I would love to curate even at the Stamp Gallery, involving a showcase of artwork by the people I have interviewed and will meet. This project would provide opportunity for those creatives to have a professional chance to exhibit their talented work.

We’ll close with a question that powered the creation of capital lives. In your own words, what do you feel lies behind the image of power?

The image of power is in direct correlation to the person that produces that image. For me, the power is in the people and that’s why it is important for me to capture D.C.’s people. People fighting for rights and succeeding in their individual lives is power to me, so I choose to show that.

Soul’s work is included in capital lives at The Stamp Gallery of the University of Maryland, College Park, from May 30 through July 3, 2018.